I've just been reading the Beeb's report on language in Scottish schools. For the past term, our kiddo has been going to an extra French class each week. I had high hopes that she would show an aptitude for languages (though she has hardly shown any interest in learning my mother tongue) but sadly, I'm not entirely convinced. She hates doing the homework but skips into the class which is full of some of her little friends from school. We are going to give it another term to see how she gets on.
However, should she be doing French at all? How useful a language is it? Sure, if you plan to deal with the French or read French literature,then I know it would be very useful. I have painful memories of sitting in French usability labs, not having a clue what subjects or other usability people were saying. I was once told,  rather sniffily, that some research I dared question had been proven in the Franco world. (Yeah right - if it was proven then translate it and let me read it mate is what I thought. Umm, I digress).
Just recently, China announced a new leadership headed by Xi Jinping- now the leader of a billion people. I keep going over that figure in my mind...that's a lot of people. Perhaps there would be more opportunities open to her in the future if she learnt Chinese?
So the question is, should we switch kiddo from French to Chinese. There are already a couple of kids shows which teach very basic Chinese (The Lingo Show, Ni Hao Kai Lan) which she enjoys. Would this be the start of a Bladerunner type world where people speak English, German (? no idea why), Japanese and Chinese? Or should we leave her in French and just let her enjoy being part of a little club of giggling girls who seems to have a blast even if they are learning very little?
Posted by Plummy Mummy at 10:17 1 comment:

So this is the packet that my brother in law gave me last Christmas:

I expected lovely long chillies. The packet said they were Twilight Numex Chillies. Never even heard of the variety. Did a Google search and nothing came up. Gulp.
What I got were short beautiful purple ones, that eventually went a glorious red and yellow colour. I waited and waited, then waited some more for them to get long but they never went past the stubby stage (we know how disappointing that can be girls, don't we?!!). Then when a new lot started to sprout, I decided to cut the stubby ones off. They are a really lovely red colour but I was worried about them being ornamental, non edible fruits.
Funnily, just did another search on Google and have now found many references to this lovely purple / red chilli  And yippee, it's edible.
Aren't they just the purtiest thang ever?

A flower by any other name 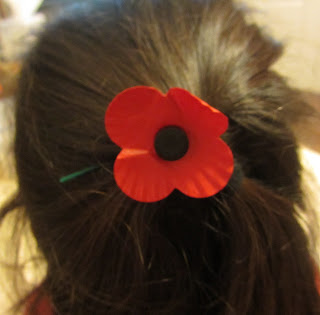 Today my daughter wore a poppy in her hair. She likes to have poppies. Last year at nursery the kids were told that people wear poppies to remember soldiers. But she's 5 and she still doesn't understand. Poppies are just a flower to her - a pretty one that her Granny likes to wear. Her Granny knows what the poppy means.One day she will understand. We will tell her that the World Wars were fought by brave soldiers (including Scots and Indians) so that we could enjoy the freedom we have today.  I may be a pacifist but I thank those soldiers who died so I could choose to be.

"All that is necessary for the triumph of evil is that good men do nothing." Edmund Burke
Posted by Plummy Mummy at 20:51 2 comments: