I was very lucky on Sunday to be child/hubby free so that I could meet a friend in town who wanted to see some art exhibitions. He was a very old colleague who contacted me out of the blue which was a nice surprise and having the art was a nice way to avoid any awkward pauses while we caught up. He cracked me up as he kept stopping on stairs mid conversation - it was bizarre and contraire to my always-moving self.

We met at the Scottish National Portrait Gallery in Queen Street, Edinburgh. This is about 5 minutes from where I work but I've never managed to get there - my loss as the building is a neo-gothic wonder. The exterior lobby area is breath taking- with stunning stained glass windows and a painted ceiling. Like a dolt, I didn't take any photos.
I had been meaning to go for ages to see the John Byrne Sitting Ducks exhibition - and luckily managed to catch it on the last day. My favourite artworks were one of Billy Connolly and another Tilda Swinton. There were also many self portraits and family portraits - fascinating to see how he portrayed himself, his mrs and children. I wish I had had time to look at each in detail. 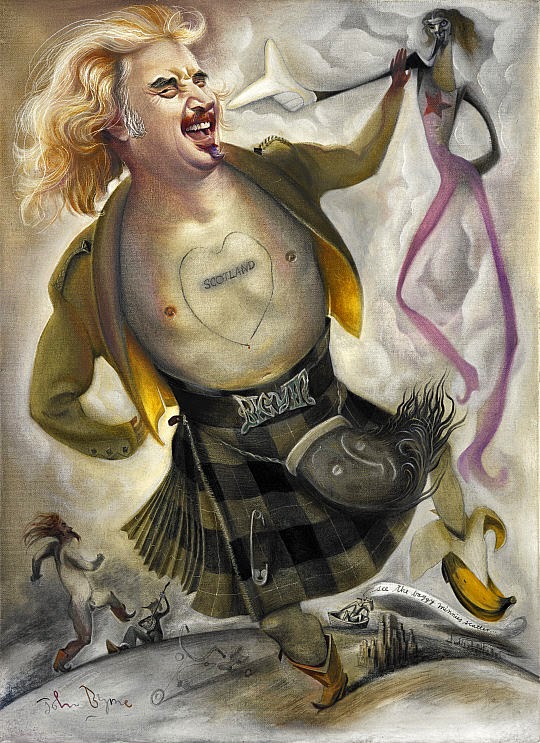 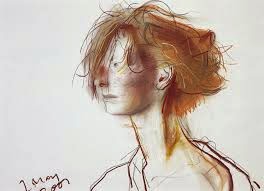 Other fascinating areas of the gallery were the library with it's phrenology exhibition and the Remembering the Great War exhibition. I need to look into Field Marshall Douglas Haig who's strategies led to so many deaths and the poppy appeal which began life at the Haig Fund to help ex-servicemen.

After a wander around the gift shop, we went in search of lunch. Ending up in Rose Lane North for a non-spectacular lunch. But it filled our bellies and we were energised enough to make our way to the
Scottish National Gallery where I wanted to see the Generation - an exhibition of contemporary artists. This is a great museum to visit as the two buildings house a wide variety of art so there is bound to be something for everyone in there. And it's accessible being just 5 mins walk from Edinburgh Waverly Station, in the pretty Princes Street Gardens. They had a bit of a shift around so some paintings that were housed in the lower gallery are now in the main one. I like seeing them in new settings. However, I did struggle with the paintings that are hung up high as the lights hit them so you need to move around to actually view them - not easy when it's busy. There is also a very loud hum in the main gallery which was off-putting. The gallery is pretty bonkers as it's actually two buildings connecting by an underground passage. So without realising it, you are in the other building. Luckily there are some red and blue dots to follow. I have to admit that I didn't really warm to the Generation exhibition - nothing interested me but there are so many paintings in the museum that I love and always am astonished they own Rembrandts that it was fine. I recommend checking out the North of the Border paintings especially the one by Peter Graham and the Gainsborough - the Honorable Mrs Graham who was a beauty and had the most fabulous dress on. I'm really looking forward to the fashion exhibition due to start mid November.

So there we go - my soul is somewhat replenished after what has been an awful few weeks. And if you read my foodie blog, you'll know that I finished the day with a lovely haul of sweets. All in all lovely ...though I was a tad guilty when I got home as Mr Plummy has caught yet another cold :(.
Posted by Plummy Mummy at 21:40 No comments:


Today I am
I don't know what happened. No I lie, I do know but I am still confused. I met a man, we decided we wanted a baby, he proposed, I accepted, baby got cut out by skilled doctors and life changed forever. In the last 7 years I have moved house 5 times. I hate moving house. I hated the second move out of London to be near people who didn't visit us. I hated the fourth move as I love London and had even come to love Plumstead and didn't want leave.

Thing is we were parents who decided that one of us should stay at home with the kid while the other worked. Having grown up with two working parents, and being married to a man who had had a stay at home mum - I was convinced that it was a good choice. So we decided he would stay home, while I worked.
Thing is I started to breastfeed and I wanted to carry on breastfeeding. But I couldn't figure out how I could do this, where I would store my milk, how I would get back to my baby should she need me if I had to commute an hour and half each way, each working day. I couldn't bear to leave her. So we changed plans, he went to work and I stayed home
Thing is Mr Plummy was made redundant and we again moved up here, over 200 miles away. The first time we lived in Scotland sucked (see 2nd move above). But this time, we moved to the shitiest place I had ever lived and I became very ill (doctors couldn't figure it out, but I think it was due to crippling loneliness).
Thing is I come from a family of women who have been let down by their husbands. My mum, my paternal grandmother and my maternal grandmother - all had husbands who let them down. The lesson was that I must never ever rely on a man, I must always work.

Thing is I like to work. No scratch that, I need to work. I loved being one of the first girls in my family to get a degree (and the only child in my family of 3 boys and 1 girl) and after quite a few years of shite jobs, finally becoming a designer. I was so proud of myself.
Thing is. I love my daughter. She's amazing. It wasn't always easy and there were times I locked myself in a room to stop myself yelling at her. But being with her and helping her transition through 5 house moves was important. We know we did good - teachers tell us they can tell that she has a home parent by her behaviour and command of language. Its not often a parent gets compliments, I gobble them up when they come our way.
Thing is my husband is not like my dad or my grand-dads.
Thing is while kiddo is at school I got bored. And that old niggle - the pride of being someone in paid employment started to really bug me
So I did a course on nutrition and started teaching small groups. But the hours weren't enough and were too few. And then there is all this conflicting evidence on what is good nutrition anyway?
So I looked for and found a part time office job. In Edinburgh. Joy was me. I'd go in and be all Mary Tyler Moore walking along Princes Street. Yes,  there were days I was bored but I would just skip off to Jenners toy and yarn departments after work and be happy. I still had the other job for the rewarding challenging stuff so it was all OK.
Thing is my job changed because there were changes in our head office, people were shifted about and I was asked to take on a new set of duties. Ones I would never have applied to do. I hate it. I am not proud of what I do. I hate going to work and today I ended up in tears in front of one of the managers.
I want to leave but I know at my age, I will never be given another job again. So I'm stuck. I am so ashamed that I cried. I am so frustrated that there is little opportunity to find part time work around my kid's school hours. And I'm so ashamed that I didn't stand my ground 7 years ago, and demand better conditions so that I could continue a role I was proud of.

Thing is I love my daughter. I am so proud of who she is and have marvelled at everything she has learnt and I don't know how much I would have missed if I had been at work.

10 years from now I plan on being in a better place than I am now. I just don't know what the fuck that will be and how the heck I will get there. But I'll be damned proud when I make it.
Posted by Plummy Mummy at 20:59 No comments: