Museums and other stuff

We are a third of the way through the kid's summer holiday. In the run up to the start of the hols I spent a bundle on buying lots of crafty kits and games for us to play ready for a dreary rainy holiday. But what a glorious summer it's been so far and we have been out and about. Some of the fun stuff so far:

Wonderful Wild Wednesdays - we are incredibly lucky to live close Almondell Park which is run by the West Lothian Rangers. The first week of the hols, we went for a day organised by the rangers to teach kids about local wildlife. We learnt lots about ladybirds and bees. There was also a chance to get up close and personal to some not=so=local creatures thanks to Cool Creatures. They were at my kiddo's birthday party last year and it was lovely to see some of the animals again especially the baby meerkats. Not so great to see the albino python but my brave kid willingly held the snake again. The Rangers regularly hold events in the three parks surrounding Livingston - I urge you to check them out.

Mythical Maze Summer Reading - a programme running throughout the UK to encourage kids into local libraries. A bit annoying that the Scottish kids started their holidays earlier but we had to wait for the English schools to be off before the website features were all working. We love to read in this house so kiddo didn't need much encouragement - each week she gets a small gift from the library and another challenge to do. If you miss a week, they keep the gift for the following Wednesday. She's missed a few weeks but hey ho, doesn't stop us reading and her trying to take out the whole library's stock of childrens books in one visit.

Edinburgh Museums - week two, the mother in law took over as I went back to work. They both came into to town to meet me. It was the day that the National Museum staff were on strike so we chose to go to the Museum on the Mound again where they both got to Strike a Coin and make another one in the machine in the Museum's lobby. A lovely souvenir. The subject matter may not be terribly exciting but the staff at the Museum are very welcoming and lovely.
Next we walked headed to the Royal Mile and the Museum of Childhood. the mother in law had a rest while kiddo and I went around the museum. It's a shame as I think she would have enjoyed it more than kiddo who's already been before and only wanted to sit on the old hobbyhorse on the top floor - its a beautiful horse so I don't blame her. And she did take more interest in the dolls exhibition this time around.
A tea break in the Scottish Storyteller Centre for yummy cake and tea. Kiddo loved the display here of scenes from old Scottish stories - and the MIL was able to tell us what a lot of them meant. There is a detailed mural of the Battle of Bannockburn which was worth the price of the tea alone. I plan to go back to visit John Knox house which is adjoined to the Storyteller centre. 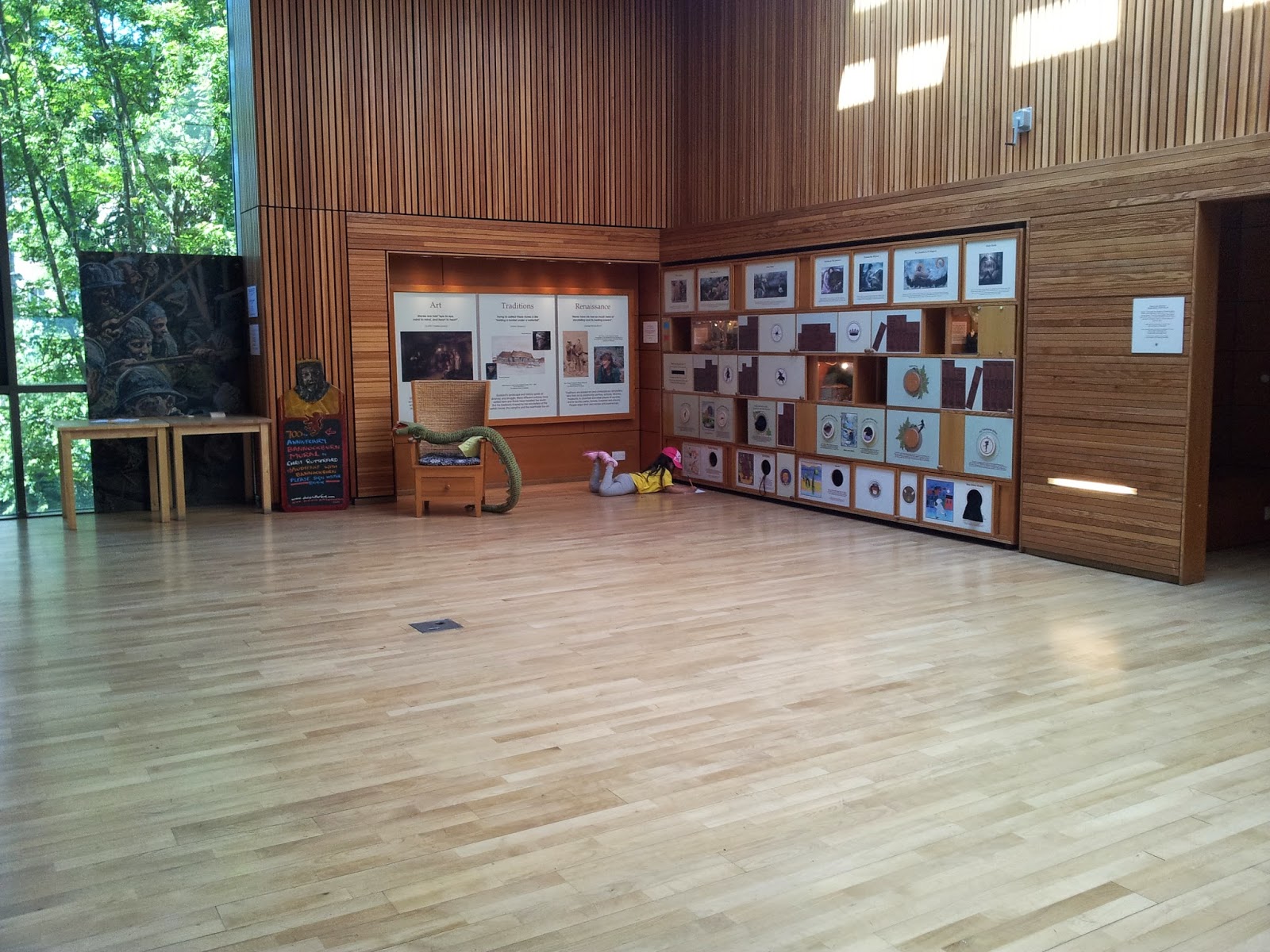 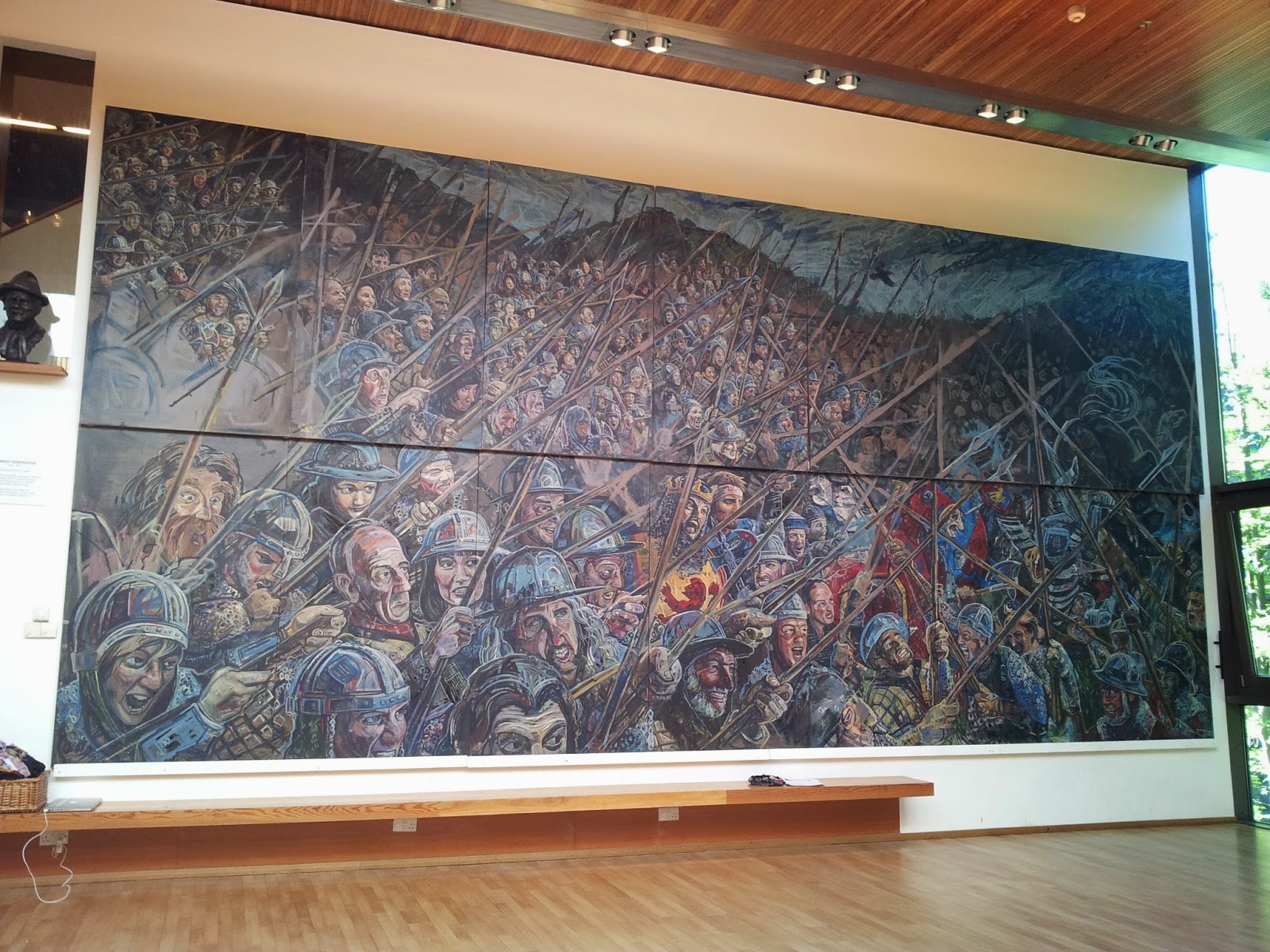 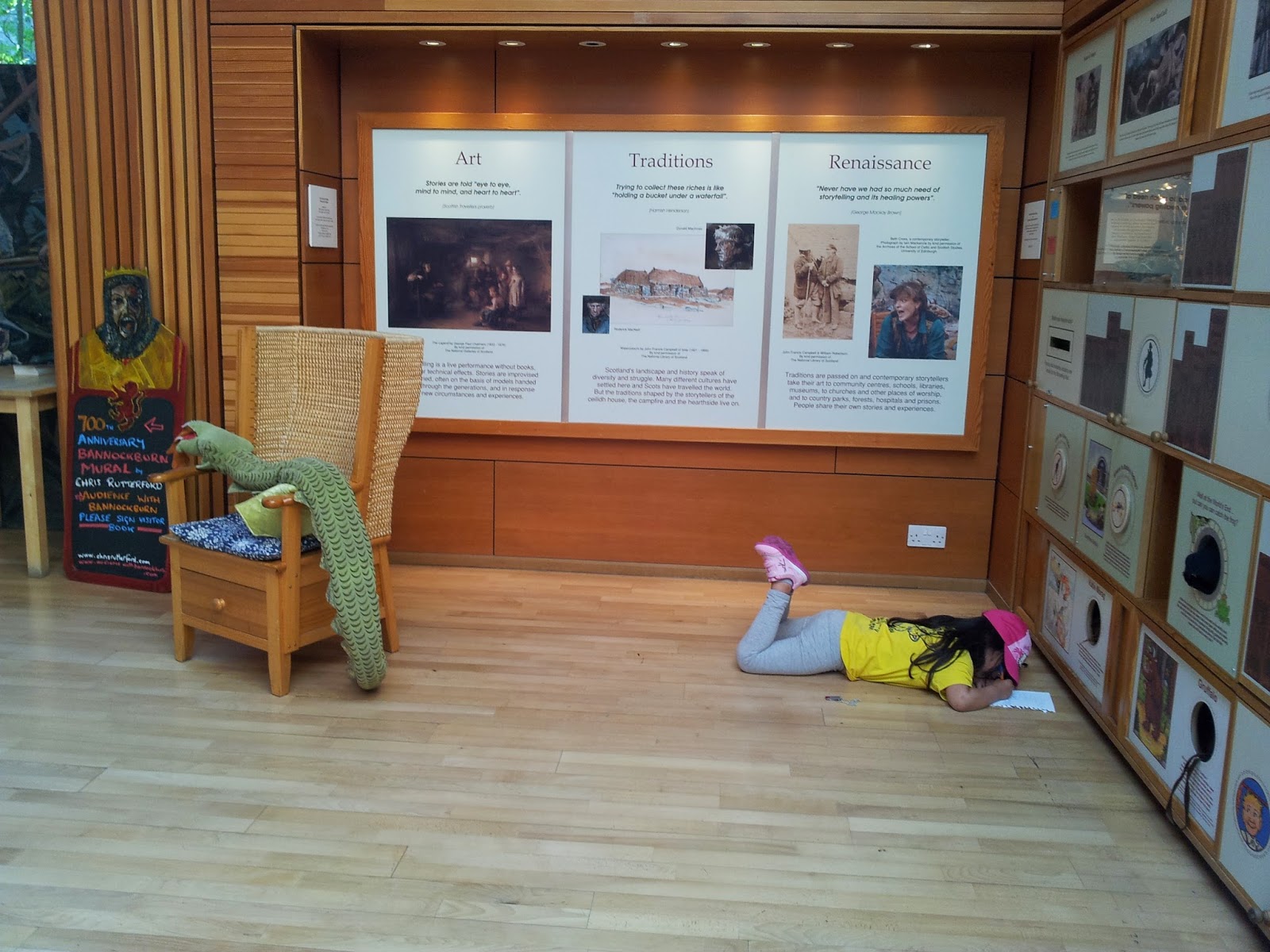 After that we headed to the Museum of Edinburgh - it was a longer walk that we expected. Across the road from a Fudge shop which was a temptation we managed to resist. On entering the museum, they had usefully put feet markings on the floor showing which way to walk - shame they didn't have any showing the way out as lots of foreign tourists tried to exit out of the alarmed Fire Exits. But this was the only issue I had with a fascinating packed museum. It's housed in an very old building with higgledy piggledy floors. First we saw a display for the Commonwealth Games and then up to the the actual museum crammed with the history of the city. I learnt that Edinburgh had had a great fire, about the Coveners and tons more. There was enough to keep the kid amused and the best parts for her were the dressing up room and the children's craft room. Absolutely brilliant - packed full of activity sheets, papers, crayons, pencils, silver rubbings. The room was a blessing on such a hot day for us to let kiddo have some fun whilst we got a rest.

All these museums are free to enter and as long as you can afford the train fair, it's a great way to spend a day just pottering about these places. There is a charge for John Knox house.

Lazy days: a lot of the days we have been enjoying our garden and just pottering around the shops in Livingston. When the MIL was on kiddo duty, she took her to the local baptist church for Messy church or just along to the local parks to play on the swings.

Simply play: Luckily this year we have been able to take enough holidays between us to cover the long summer break. But for one week, the kid went along to mornings at a Simply Play holiday club. The Mr and I had to do a bit of juggling and dashing about to pick her up as she finished before I did. So there was a mad week of handovers but I wished we could afford to send her more often as it's a chance for her to meet kids her own age. I do worry that she gets lonely as she's an only child and out of school a lot of her school friends are away. She was reluctant to go but by the end the week, was happy and wanted to go more often.

Thunder and lightning: we heard rumbles of rain and the odd bit of thunder but no lightning. I'm so happy to be in Scotland when I read of the 30+ temperatures in the South East. London in a heatwave is hideous whereas Scotland with a bit of sunshine is just beautiful. And the rain, wow so much rain fell on our house that we thought we would have to get the sandbags out. Then it got very very misty. And today, back to the warm sun. Just love these changes in weather.

Carnival / mum goes off: We were back in Edinburgh today for the Edinburgh Carnival. It was a little chaotic as we thought our kid could turn up in costume and join the parade. But no, you had to be signed in. Also not well advertised so there weren't many kids there. I didn't see any of it as I slinked off to the National Museum of Scotland to see Nordic Knitathon.  I had great fun at the crochet workshop with Arne and Carlos but was sad to find that I was too late to join the knitathon (my view that crocheters are more friendly than knitters was sadly reinforced).

Ketchup? No catch up

Time for a bit of a catch up and I'll try to make sure it's not like a Christmas letter! (Yes I mentioned Xmas and it's only July)

Work: I did a course with the local council trying to teach kids who had left school without any qualifications. The council find them work placements for 16 weeks and one day a week, they have to attend a day of skill learning - including a session of basic cooking skills. There was a lot of resentment on their part regarding both the cooking and cleaning. I had a difficult time seeing them waste the food they had cooked but refused to eat. It was probably the hardest job I've ever done. Funnily, once the course ended, I really missed the kids and the challenge!

Regular work: Sadly the hours from the council are not regular enough so in February I got a part time admin job in Edinburgh in fashionable George Street - a very swanky street full of top end clothes shops and restaurants. The people in the firm are super clever and miles away from the kids I was teaching. I work 4 hours a day and naively thought that would give me loads of time to go around Edinburgh. On most days, I'm running for one of the two trains that run an hour to get back in time to pick up the kid from school - really makes me miss London Underground with it's regular trains. And there are early starts meaning getting up before 6am. It's been nearly 5 months and I'm still getting used to it :S

Castle: As I exit Waverly Station everyday, I'm try to make sure I look up at the Castle. I don't want to forget it's there. It is odd being on the lower New Town part of the city looking up at the Edinburgh Old Town - can just imagine how the peasants felt back in the days when the Castle was occupied. 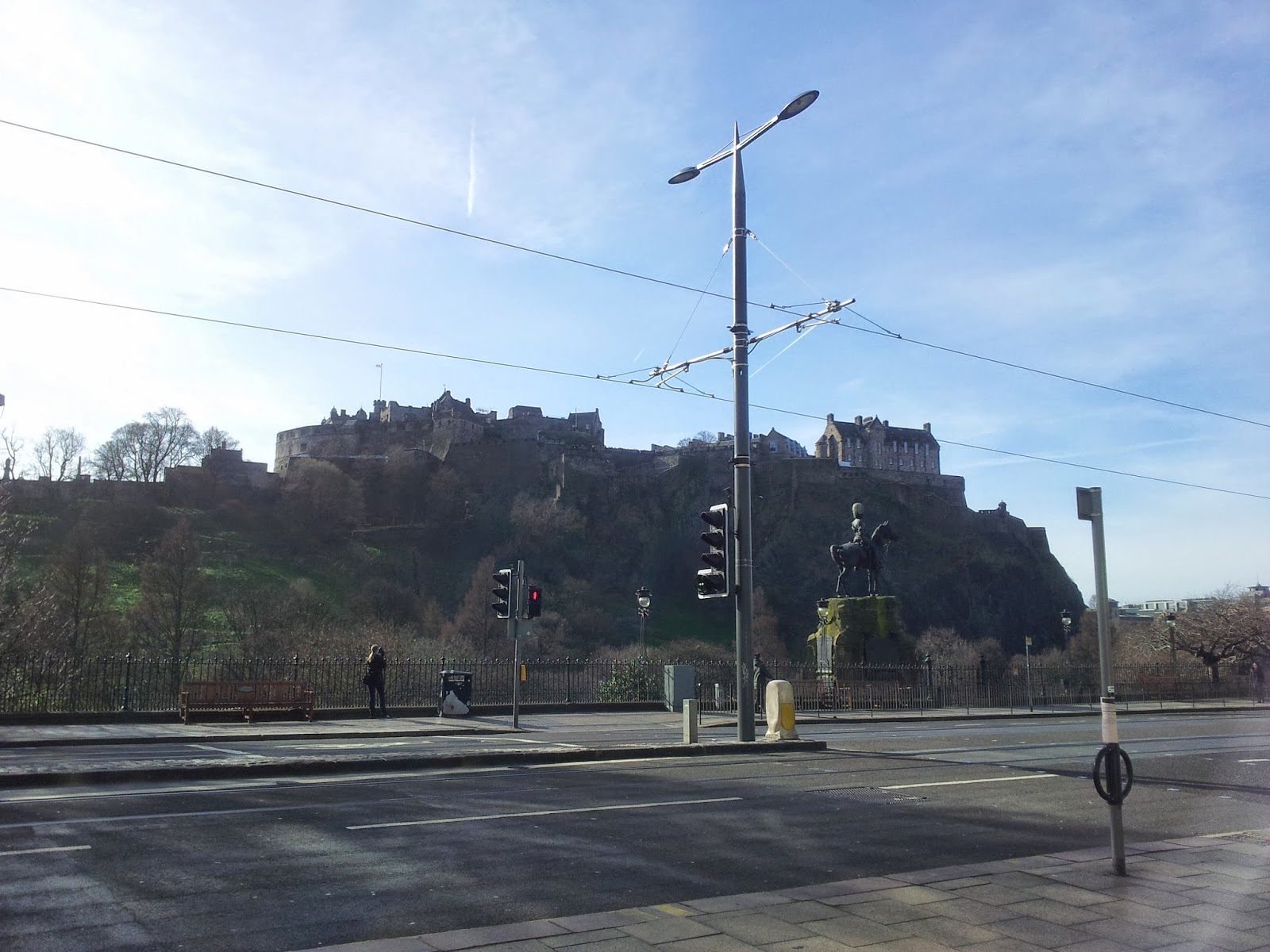 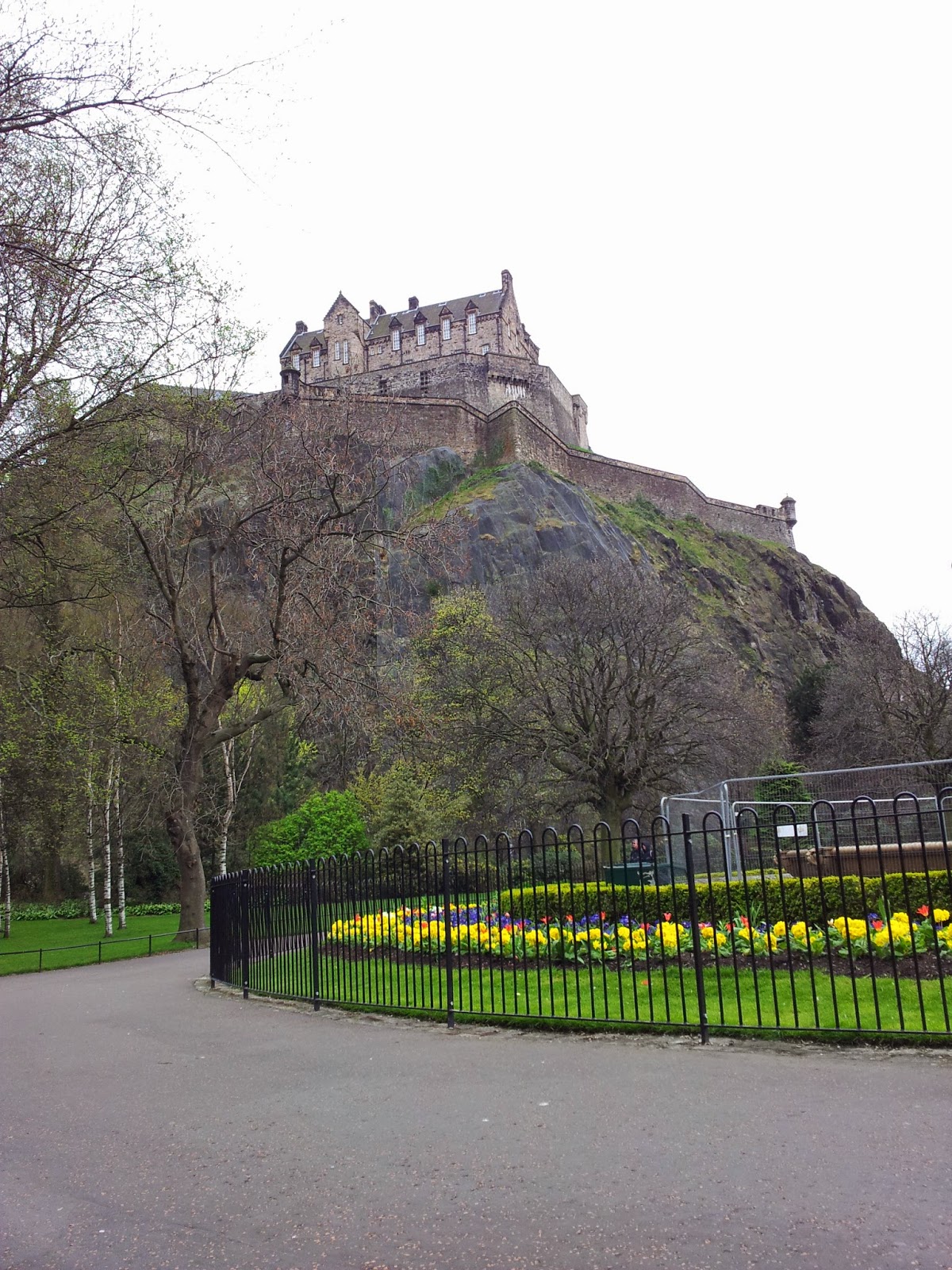 Mountains: We went up to Aviemore for a short break for my birthday. Amazing views from the top of the CairnGorm mountain, riding up on the Funicular Railway. And yes, that was snow in May. A smallish strip but I was chuffed to bits to see people snowboarding and skiing. Luckily the rest of the area was not covered in the freezing stuff and we spent some great days exploring the area. 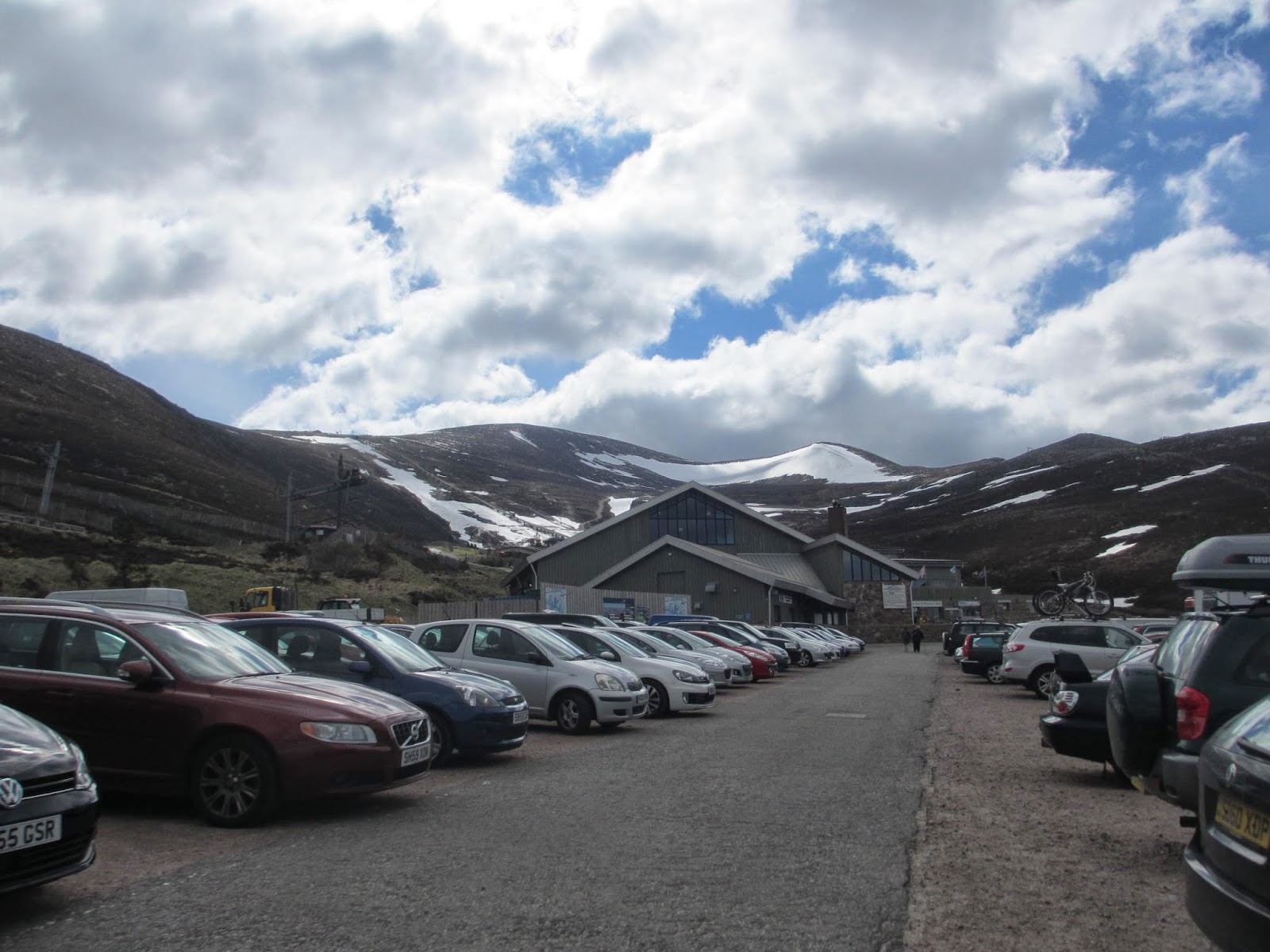 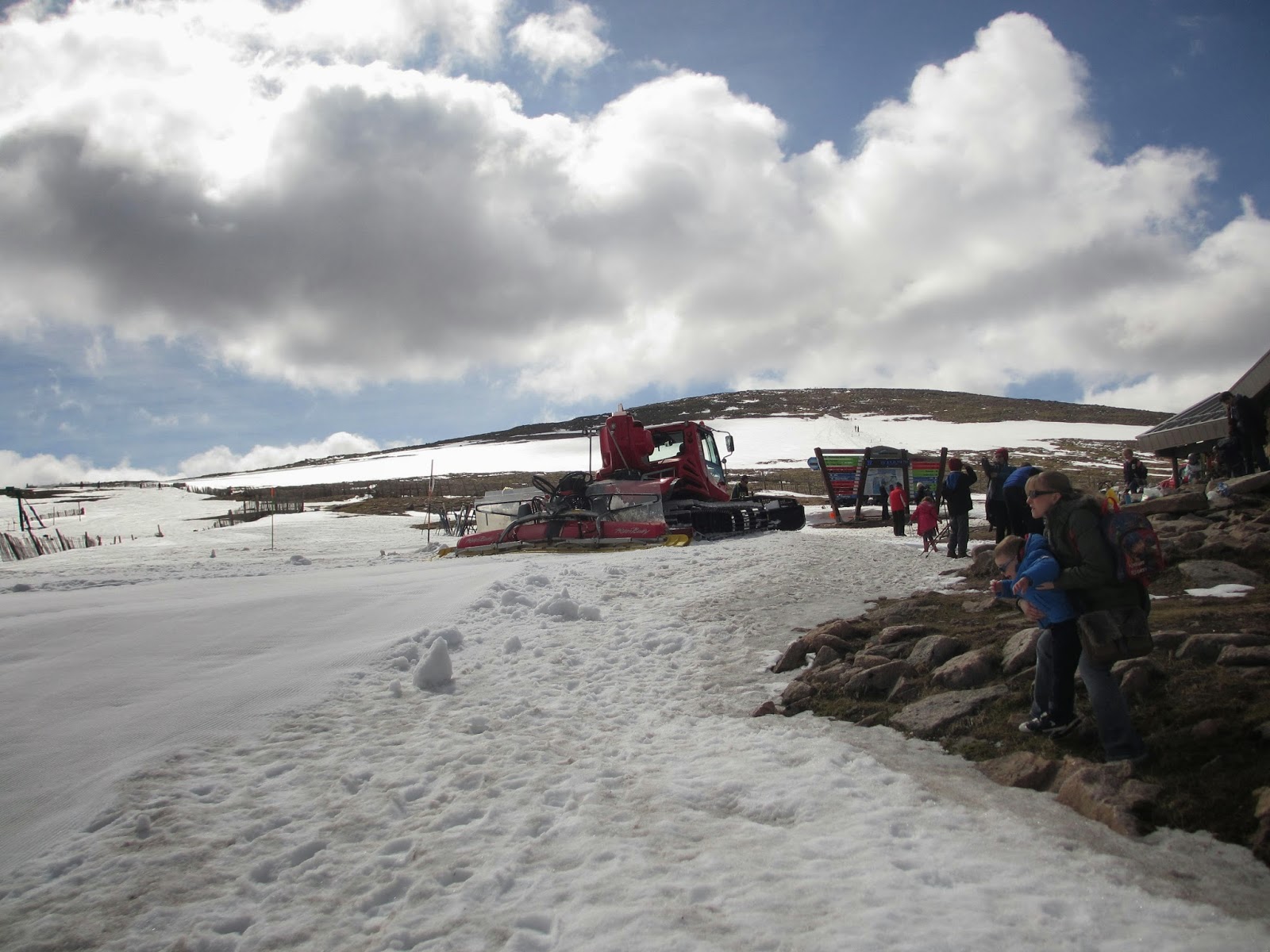 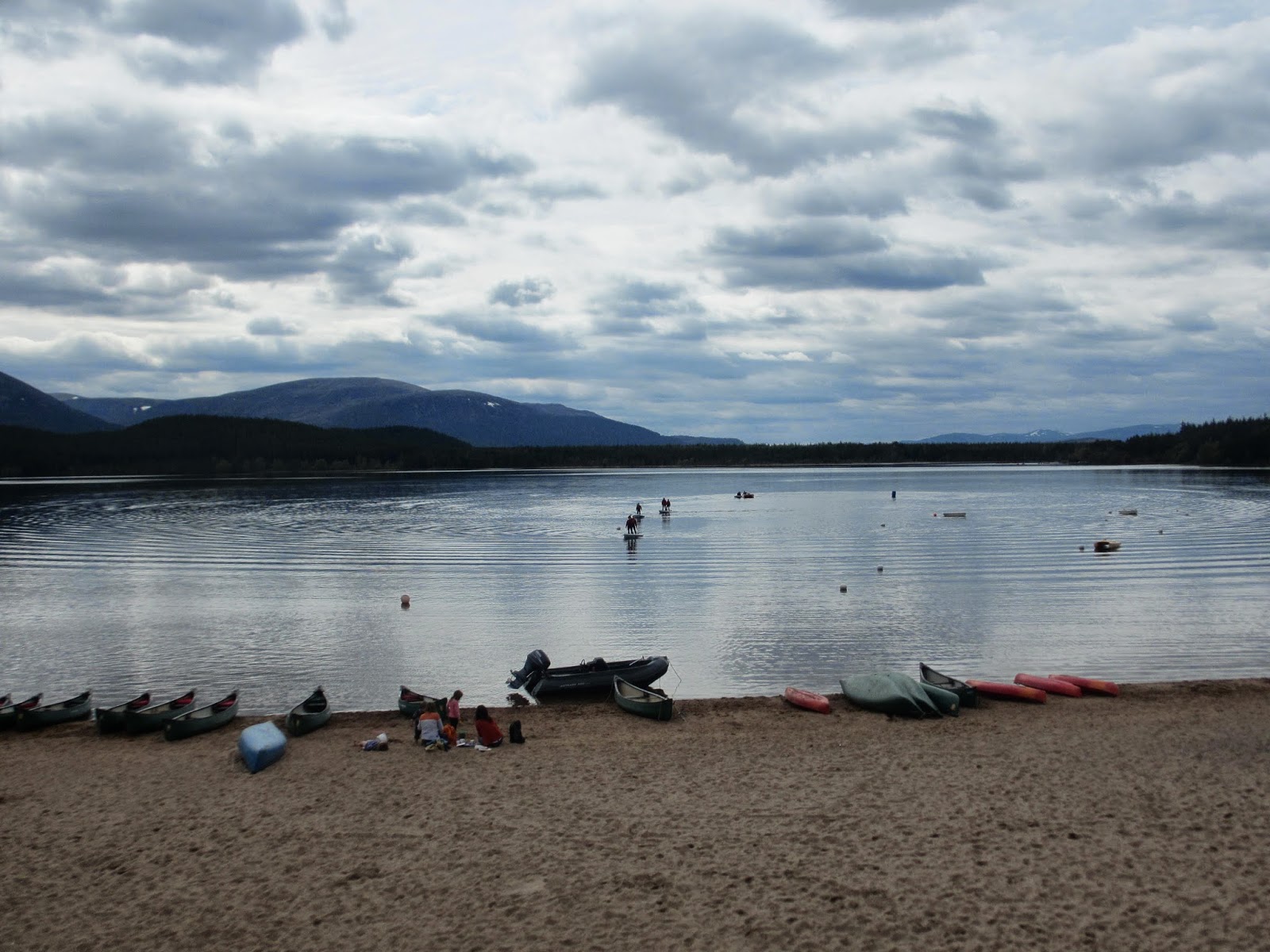 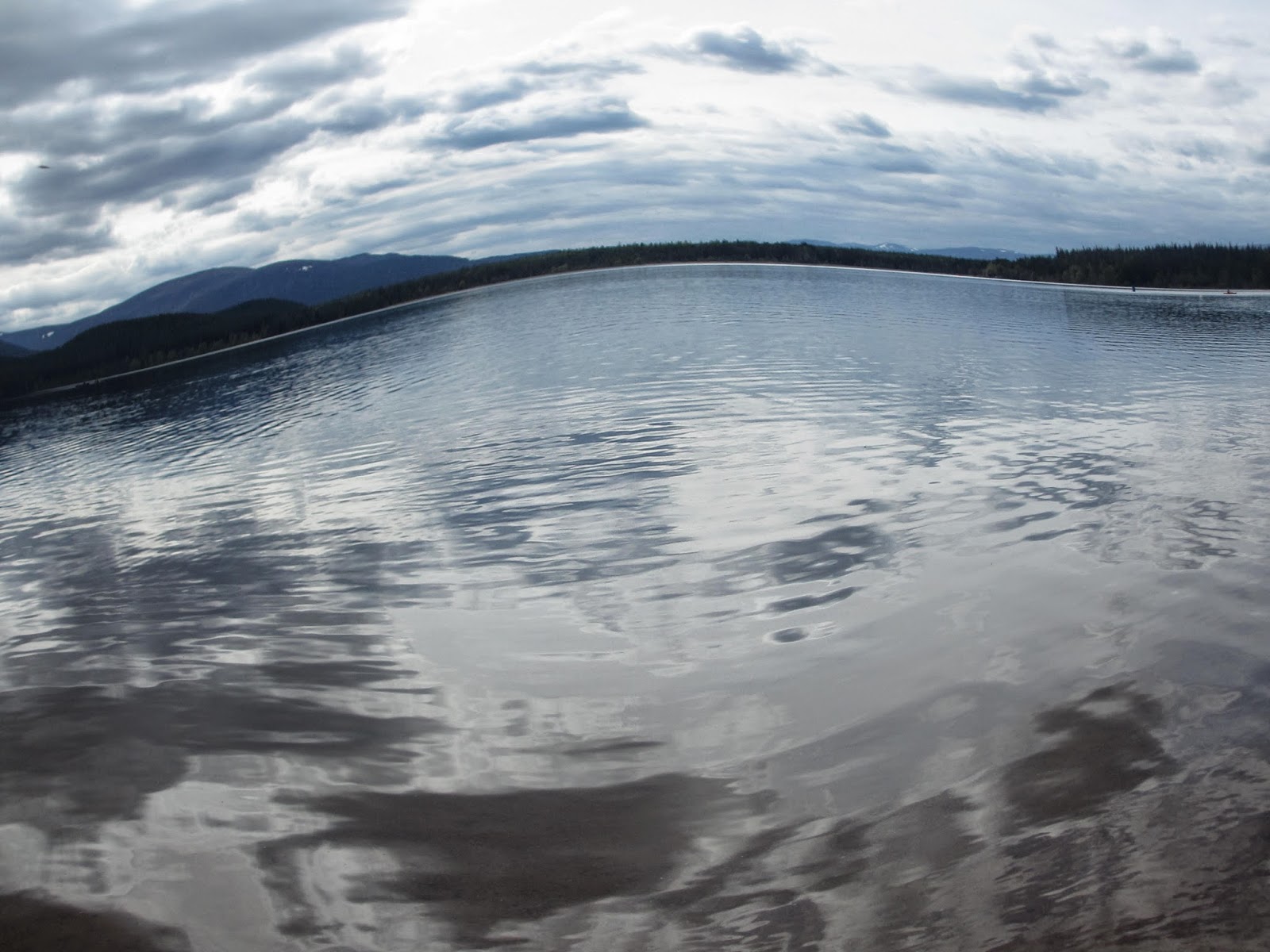 Beaches: we visited  Cramond Beach which is in North Edinburgh on a sunny day in June. It's quite a short drive from Livingston. There are some beautiful views though sadly the beach itself was very dirty. Mr Plummy Mummy's family come from Dundee and the beach there at Broughty Ferry is so clean that it's always a shock to me when I see one that isn't as well kept. However, it's definitely worth going here for the views and to see the old WW2 fortifications. 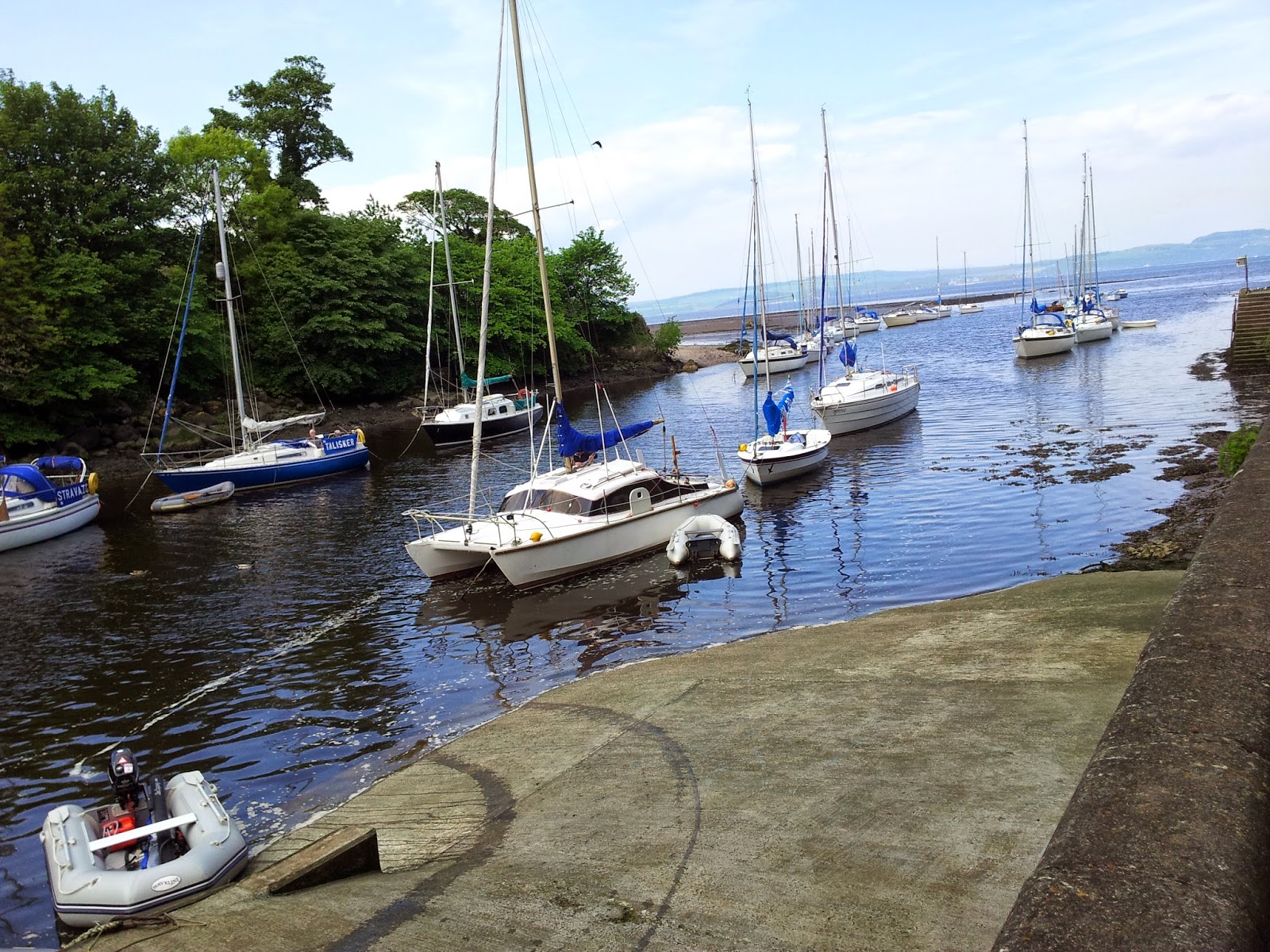 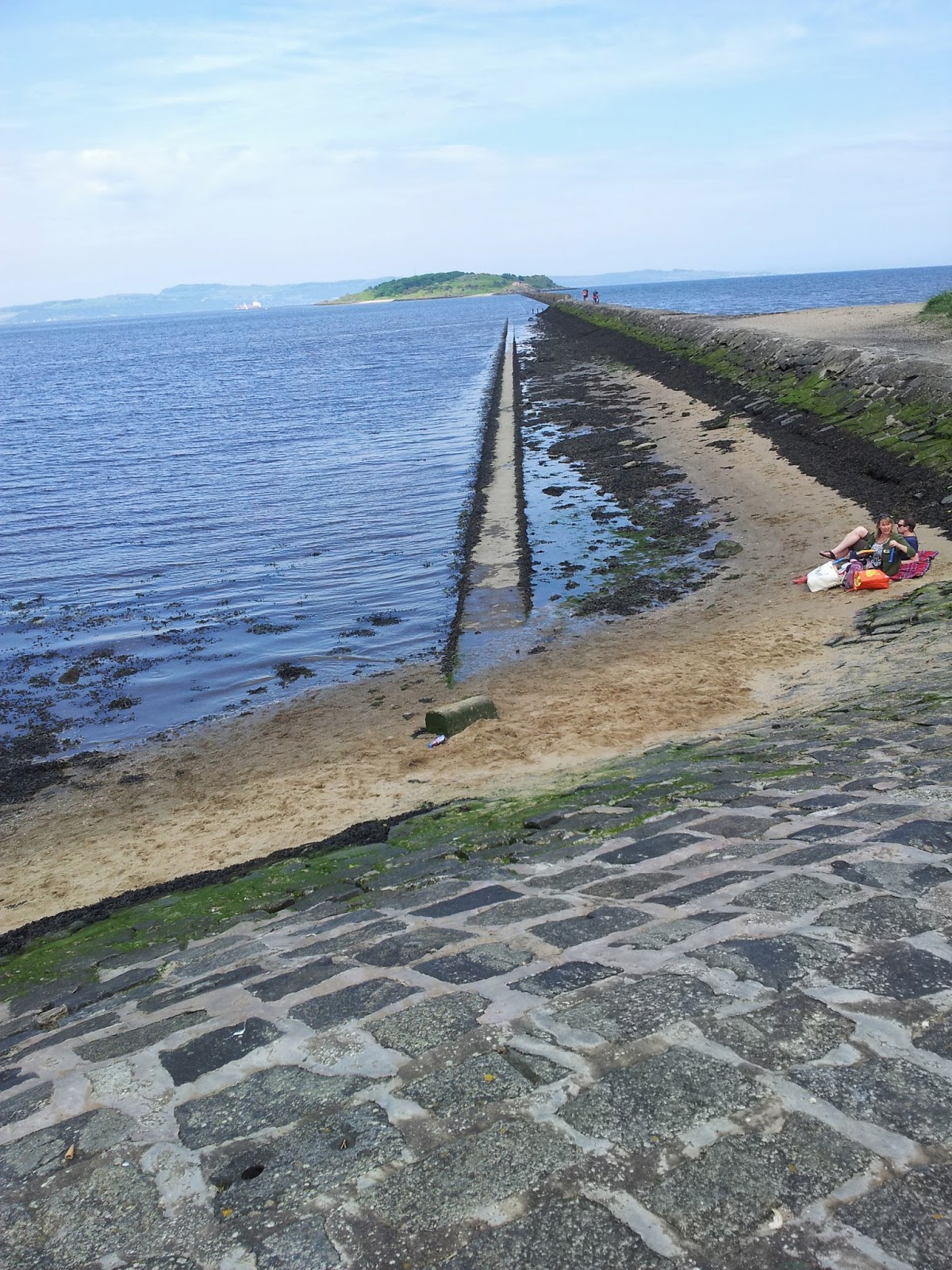 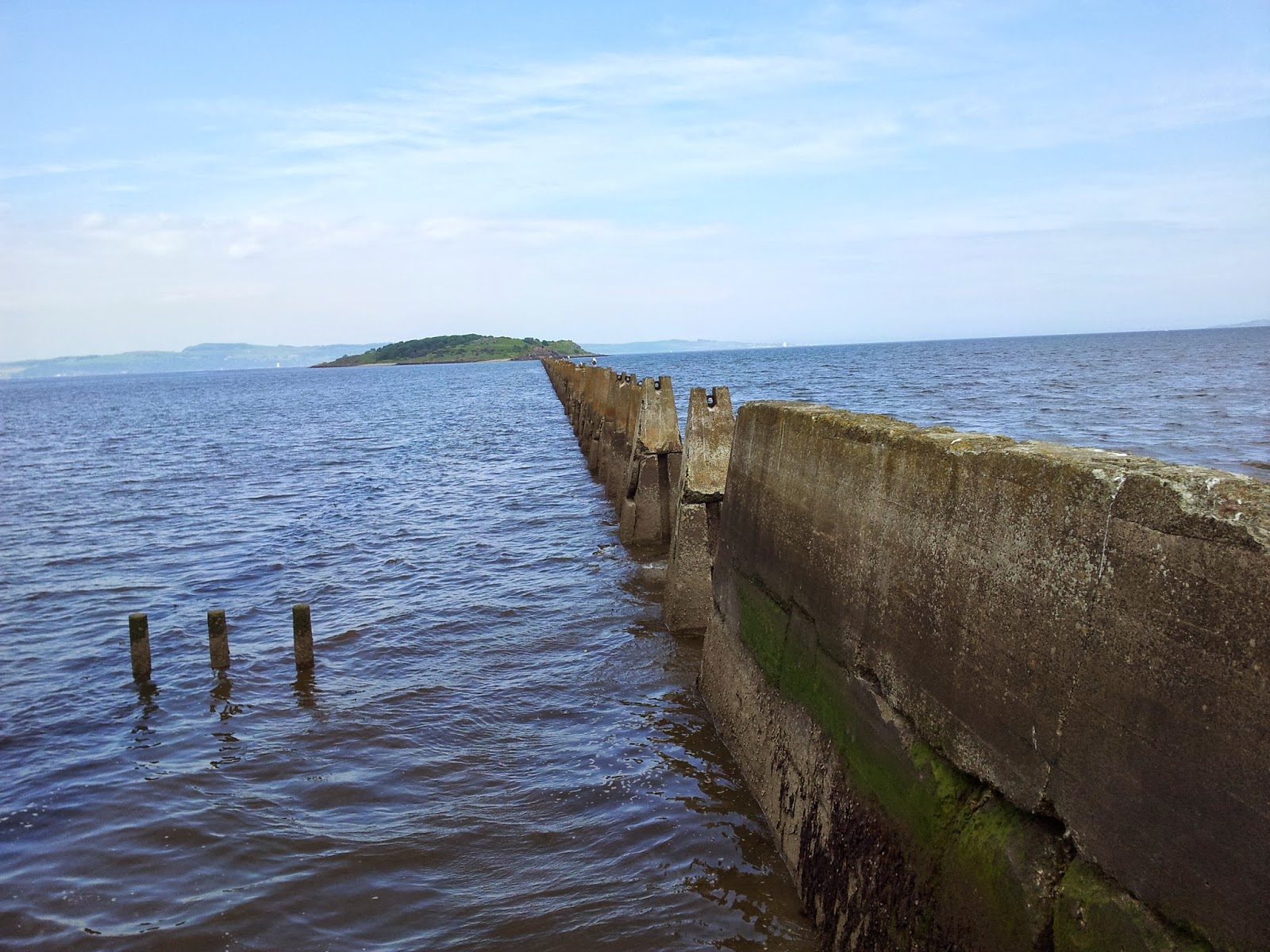 Helix Park in Falkirk - this is an amazing place developed on old industrial ground right next to Falkirk football stadium. We (foolishly) chose to go on the first weekend of the holidays so all the car parks were rammed. Like a lot of other people, we ended up parking on the grassy area. Sadly the developers massively underestimated the amount of parking needed. The Kelpie Horses designed by Andy Scott are AMAZING - really beautiful sculptures and together with Falkirk Wheel, are helping to turn this area into a great destination to visit. I was gutted to have missed the launch at night when the horses were lit up and there were fireworks. A rare moment when I missed living in Falkirk :) 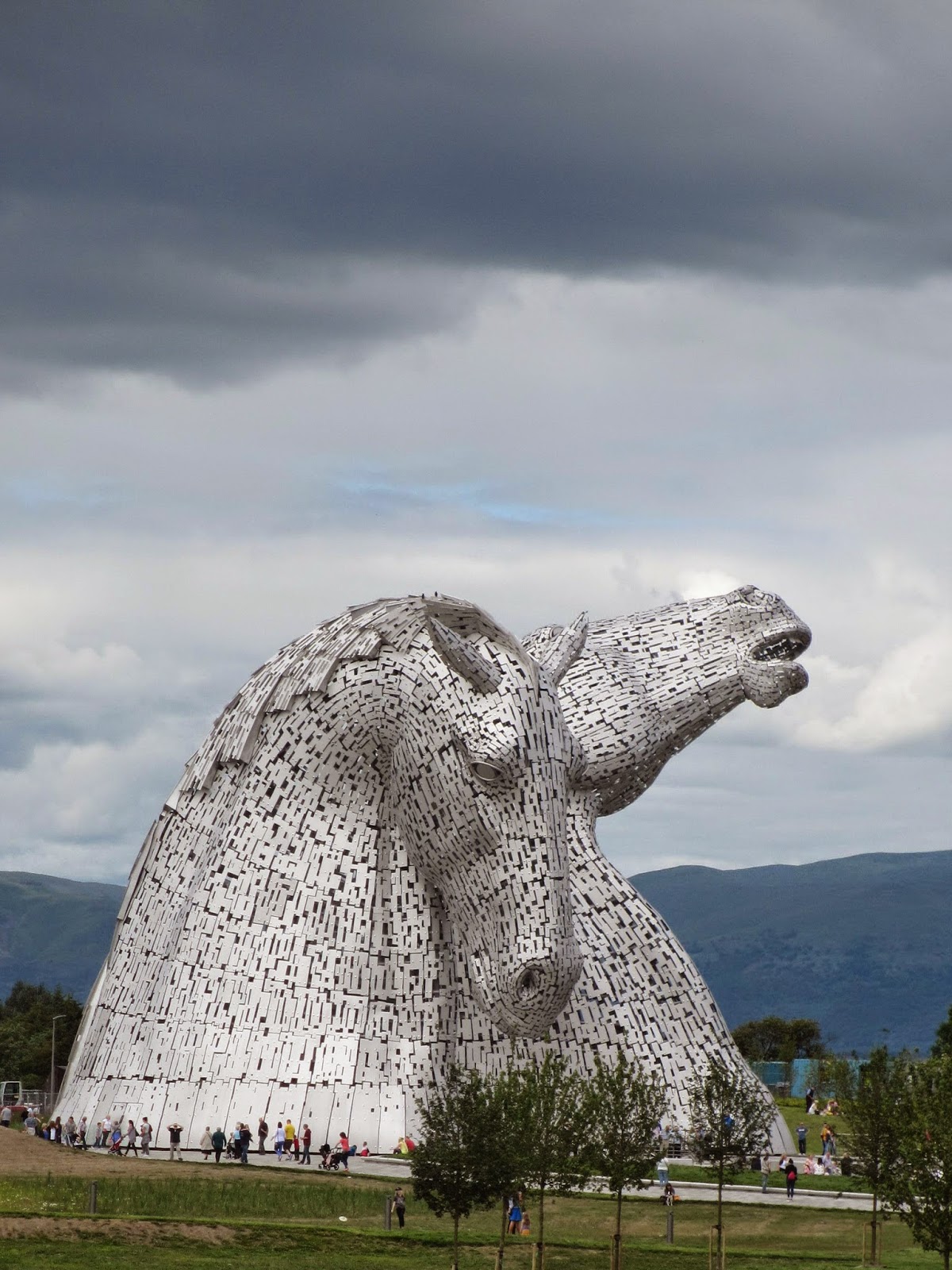 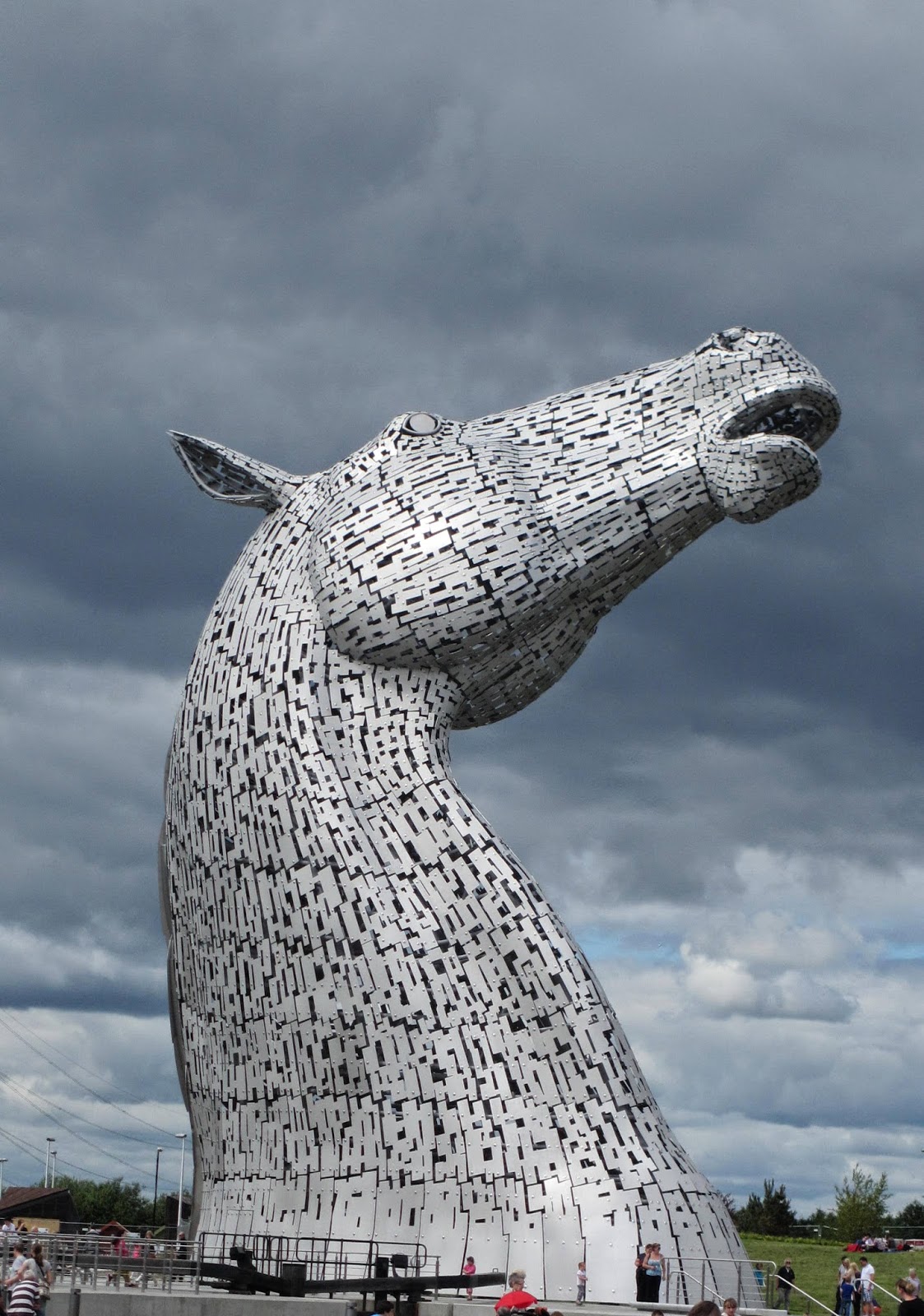 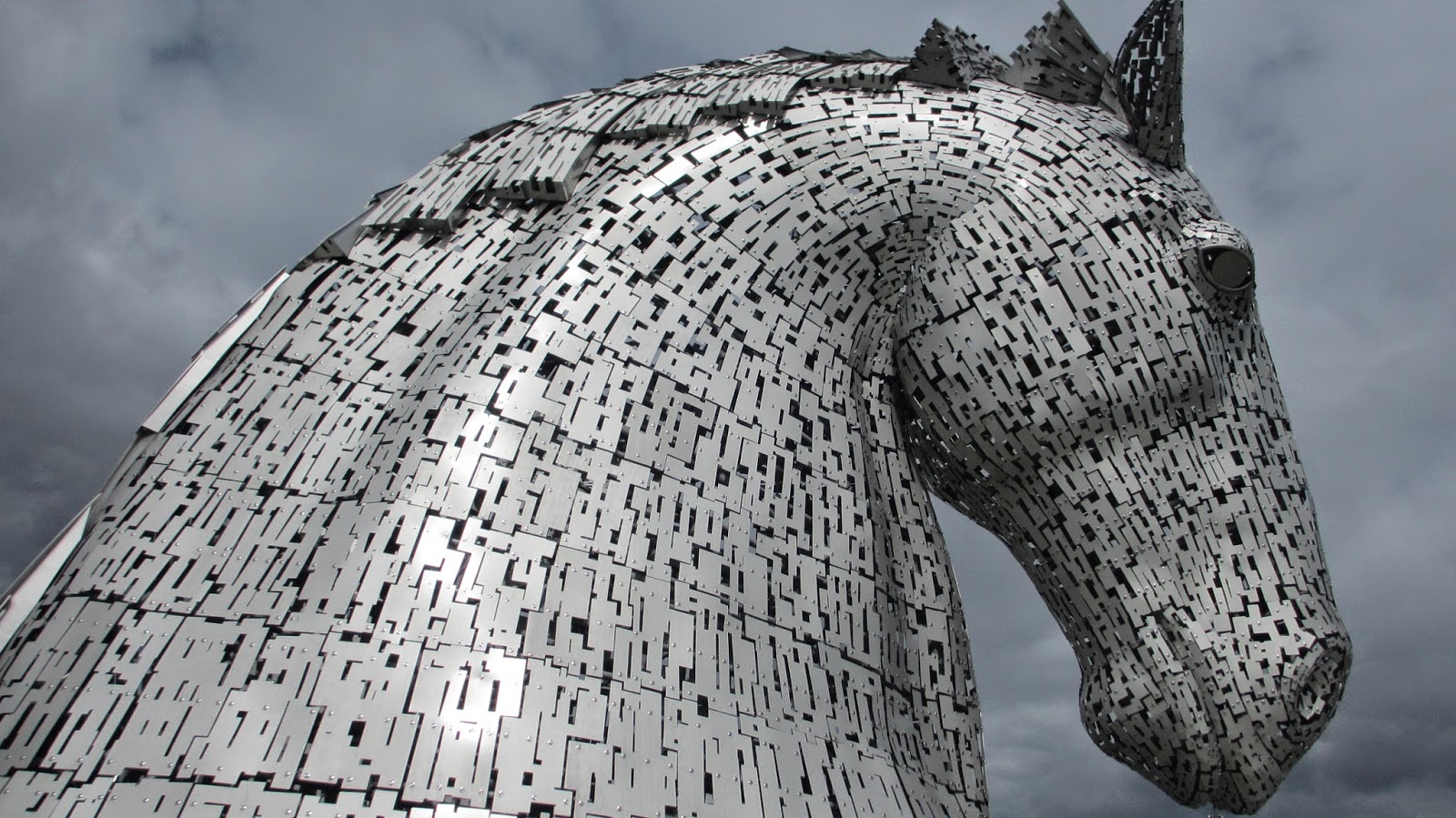 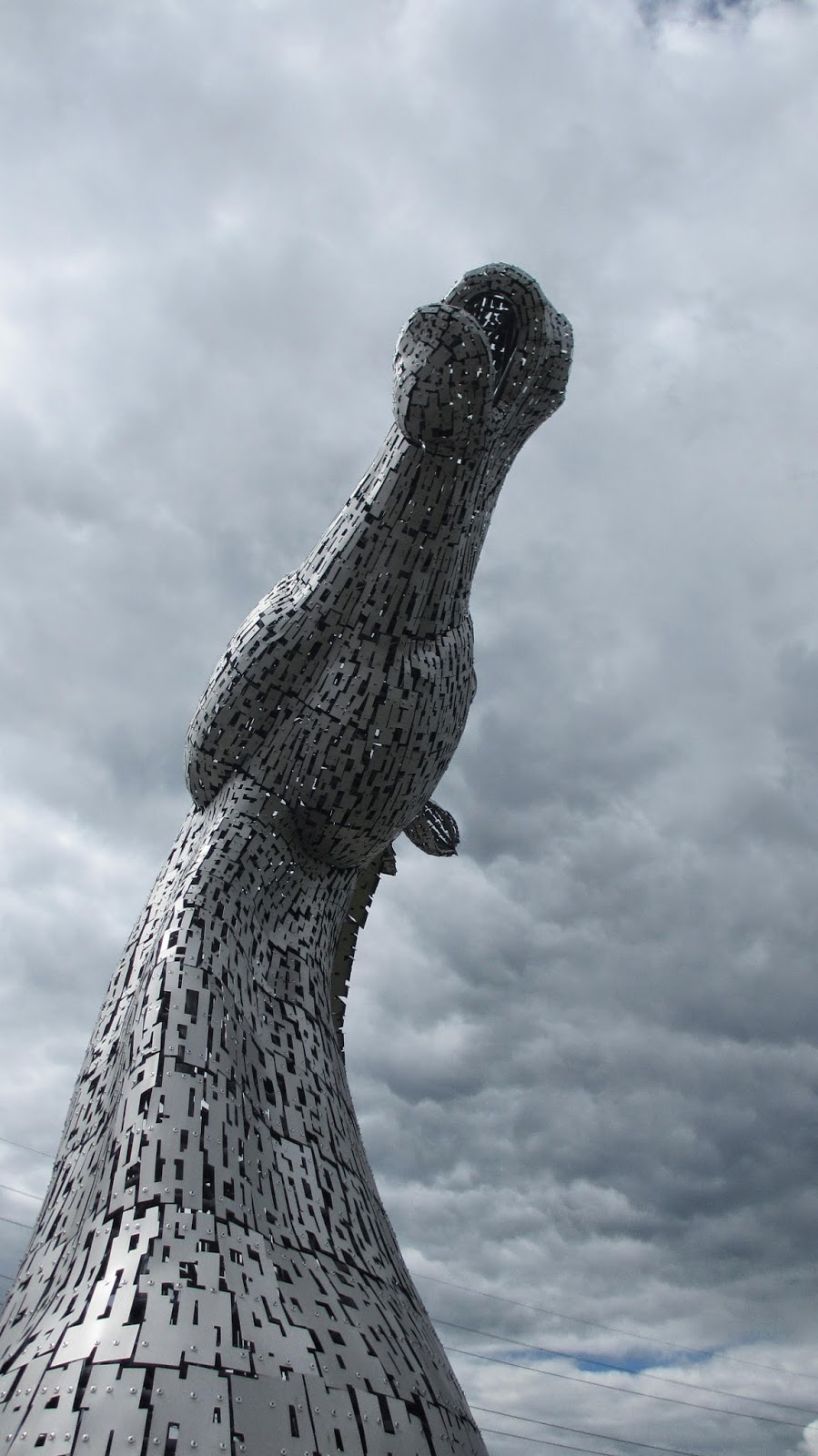 There is a wonderful waterpark which is part of the Helix park - and after I got my fill of culture taking a million photos of these sculptures, we took kiddo to the waterpark to have fun in the water. It was all so lovely apart from the idiotic mother that let her young daughter run around naked in the water. Just seemed so wrong especially when the little s*d decided to wee in the water. Quick exit for us!

Gardening Scotland 2014 - Chelsea this is NOT! It was tiny. We were in the midst of buying the house we rent and I wanted some ideas for designing the garden. There were only a few show gardens which whilst gorgeous, were beyond my gardening skills. There was an area for schools gardens and some of these really clever in their designs. Inside the main hall, there were lots of plant displays and I've picked up a couple to try out on the garden.

So that's it, caught up to June. In the next post, I'll cover July after I've watched Monty Python live on Gold
Posted by Plummy Mummy at 20:43 No comments: