Yesterday I decided to take the tot into town. The plan was to go via Woolwich Arsenal to Charing Cross and then to St James Park and other parts from there. The plan, as all mine tend to do, changed. We got on the No. 53 from outside Co-op and stayed on it as it goes all the way to Horse Guards Parade. What fun! Well actually tot fell asleep as the scenery isn't that interesting until you get to the Houses of Parliament. I felt rather bad trying to wake her up as we crossed the river but I didn't want her to miss it. The bus stops at Horse Guards parade...fantastic. She liked Big Ben (though the explanation that it was the bell inside that was nicknamed Big Ben (real name Great Bell) and not the clock was lost on her)...especially when it chimed the hour. What are the actual clocks and tower called? Whatever, lets celebrate as they were 150 years old in May 2009. 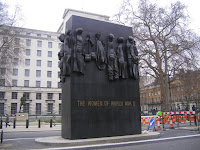 Very close to the bus stop you can see this memorial to Women of World War II.

At Horse Guard's parade, there were no horses and Queen's men to see but tot determinedly searched for Humpty Dumpty anyhow :). It's a short hop, skip and jump to St James'. She refused to walk. It was very cold and she was having none of this exercise malarkey. And when we went to feed the rather overzealous birds she was firm in her seat. I really liked seeing the different coloured ducks and the black swans. Did you know ducks eat corn in the wild so next time, take a cob along and pull off the seeds for them. 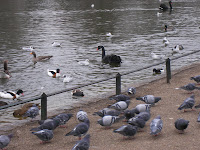 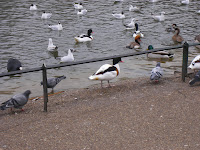 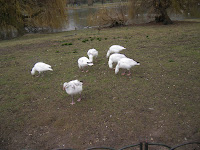 When I showed her Buckingham Palace she asked if we could visit with the Queen. Kids are so sweet. I explained that Queenie doesn't just take visitors on the spur of the mo and it costs a lot to get inside so maybe another day.
After St James' we headed to Trafalgar Square. The fountains were a huge hit if the squeals of joy are anything to go by. And for me, I was happy to see they have recently added some loos there and even more marvelously, baby changing facilities. I really need a map of these around London because potty training is so far limited to home. I dragged her away from the fountains and lions into the National Portrait Gallery to see the Indian Portraits exhibition - we went round at breakneck speed as she thought the exhibition was boring and preferred the large photos in the main gallery and the colour changing one of Vanessa Feltz. If you go, make sure you check out Self by Marc Quinn which is made of the artist's own frozen blood. Very bizarre but hey I don't get art so what do I know.

To torture her further we went to the National Gallery. I fear my child is really not into art. She just want to run around the fountains and lions in the square. One thing I quickly realised is how incredibly rude foreign teenage spotty students are - they travel in packs, take up the whole pavement and don't move even when politely, loudly and then stridently asked by me. I nearly choked when I was struggling through a door and one of the brain dead just breezed past me.
The second half of the day involved a walk through Covent Garden, a useless adventure in a bank (Santander suck big time), fun times in Forbidden Planet who have a lift to go to the comics floor (yippee I got my Dr Strange....booo it's in black and white not trippy colours). Then as we waited for Mr Plummy Mummy, I strolled over to the British Museum that's open late on Thursday. On the way, I marvelled at the changes in the city and also happily ploughed through more foreign teenage students and cursed very loudly as a decent south landahner does. 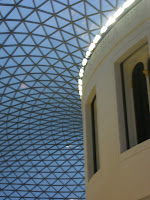 The British Museum is my heaven on earth which has been further improved by the Norman Foster forecourt. If I could, I would have been married here and given birth too. At night, the view through the glass ceiling is calming. In a thunderstorm, it's electric. There are benches to sit on (handy for feeding tots) and again baby changing facilities. When Mr PM turned up, we took tot around the Egyptian gallery to see all the giant heads and then up to the clock exhibition as she has been obsessed with Grandfather clocks since our visit to Eltham Palace. We were greeted by the loudest bell after Big Ben which sent her cowering into daddy's arms. The gold Carillon clock is impressive in it's details but I was blown away with the fine work on the astronomical clocks.
Hunger beckoned so we didn't hang about but given time I believe this museum would fascinate her much more than any art gallery so I am planning to take her back sometime. The evening finished with dinner at Wagamamas (very child friendly except for the stairs down to the restaurant) and then the trek home. London transport proved hellish as we had to precariously hold stroller on the longest escalators down to the Central line at Tottenham Court Road and then walked miles up and down stairs at Bank Station (take Diamond Geezer's advice and avoid this place). Though have to say many thanks to the young man who helped us carry the stroller up two staircases...so nice. I couldn't face the bus home from Woolwich so took a cab. What a wonderful cabbie..he let us roll the stroller on board and helped us take it off at the other end. Tot was overjoyed at this little ride back home and at the end of the day..that's what it was all about - JOY.

The tower that Big Ben is in is called St Stephens Tower.

You are allowed to take buggies in black cabs and in all cabs you dont have to have your child ride in a car seat...I am a big fan of buggies in black cabs, hate the tube so that tends to be how we get across London!
We also went to Trafalgar Sq recently and did the National Gallery. Tot seemed to prefer the Tate Modern! La Tasca is great for children (or mine) as they like the variety. We usually take a voucher from discount voucher codes whereever we are off to.

Plumbun - I liked Tate Modern but when we tried to take tot, found it was a bit too busy and we weren't very confident about letting her out of her pram...didn't want to have her destroy works of art!
Where do you get your voucher codes from?

That sounds like it was a great day. London really is fantastic.
(If I may butt in, I get vouchers from http://www.VoucherCodes.co.uk and http://www.moneysavingexpert.com/deals/discount-voucher-codes)

we also use vouchercodes.co.uk. Google "discount voucher codes" and there are various ones that come up.
I am always amazed in art galleries that the general public let alone children are allowed so close to paintings. It would be so easy for someone to scribble on a Van Gogh or just get a knife out and slash the pictures. I know I never will but there is something being in such close proximity that makes me want to poke my finger through paintings.....

Thanks to the links to the voucher stuff.
Plum Bun - UK galleries are nothing. When I went to Abu Simbal in Egypt peope were allowed to take photos and touch everything...absolutely no respect for antiquity. What was really annoying was the Egyptian tour guide kept going on at the English (who were her customers) about the stuff held in British museums and that we should give it back. I told her that up until very recently, the Egyptians had done absolutely nothing to preserve their heritage. Made the rest of the trip very interesting!